The store will not work correctly in the case when cookies are disabled.

Recommended
by your knees.

With 34% knee injuries sadly top the ranking of the most common ski injuries. They are mainly caused by backward twisting falls. Conventional bindings of all major suppliers are designed to reduce the risk of injuries to the lower leg below the knee, but they are not intended for preventing injuries to the knee.

Thanks to the innovative FULL HEEL RELEASE function, the new PROTECTOR binding can reduce ACL strain by more than 50%*. This can significantly reduce or mitigate the risk of knee injuries and injuries below the knee.

The new PROTECTOR binding thus offers you unprecedented safety and once again proves that you can better even the best. 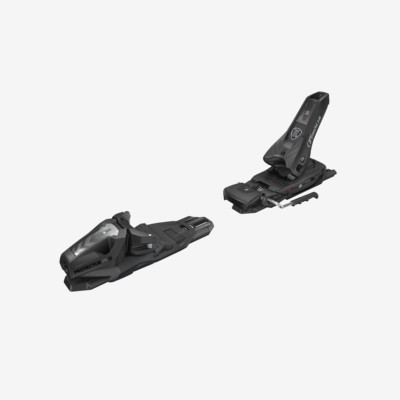 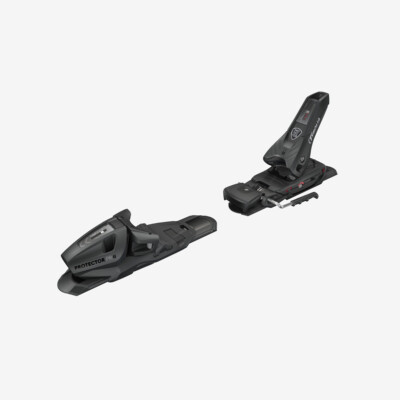 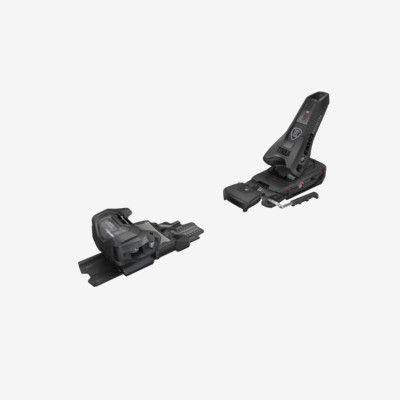 The most common injuries in recreational skiing are knee injuries (especially ACL injuries). 75% are mainly caused by backward twisting falls.

In backward twisting falls the release values with PROTECTOR can be more
than 50% lower compared to a conventional binding.

Thanks to the reduced release values in the event of a backward twisting fall, the forces on the tibia and the ACL are reduced by more than 50 %. This decrease will finally lead to a significant reduction and mitigation of knee injuries and assures safer skiing.

These results are officially confirmed by independent studies completed at the University of Innsbruck.

APPROVED BY THE
UNIVERSITY OF
INNSBRUCK.

How does it work

2. Higher forces that exceed the release setting will move the heel the full 7 mm at which point PROTECTOR rotates open by 30° to release the ski boot.

RECOMMENDED BY YOUR KNEES
AND DIDIER CUCHE, SKI-LEGEND

The PROTECTOR PR 13 and PR 11 models are based on a PowerRail base. These models work with all skis with a premounted PR base. For all flat skis we offer the PROTECTOR Set models.

The PROTECTOR Attack model combines the best of both worlds. The Attack toe offers:

The ASTM testing machine is used to simulate various falls and measure the corresponding forces on the leg. In this clip you see the PROTECTOR being run through two of these tests, and how its test results compare to those of a conventional binding.

As the world’s ski binding market leader, we at TYROLIA are thrilled to unveil PROTECTOR, the most safety-focused bindings yet. Thanks to Full Heel Release (FHR), our revolutionary 180-degree heel release mechanism, the PROTECTOR binding is currently the most effective binding at preventing serious knee injuries and reducing the risk of injury caused by backward twisting falls.

WHAT WAS THE STARTING POINT FOR THE DEVELOPMENT OF THIS INNOVATION?

Numerous medical and sports science studies show that knee injuries account for one-third of all injuries incurred in recreational skiing, with anterior cruciate ligament (ACL) damage being the most common knee injury. The backward twisting fall is known to be the main cause of these knee injuries. Our goal has been to improve this situation and reduce injuries through mechanical advancements in our bindings. This is why PROTECTOR is so thrilling – it is proven to reduce the risk of knee injury due to its Full Heel Release.

WHAT IS A BACKWARD TWISTING FALL?

Characteristically, a backward twisting fall presents the following elements: the center of the skier’s body is off balance (typically leaning back), a load is on the end of the ski, ligaments in the knee are pre[1]tensioned, and a catching inside edge causes an internal rotation of the tibia relative to the thigh. The ACL usually tears when the knee is fully loaded in this flexed position and rotated at the same time, or when the knee is hyperextended.

WHAT MAKES THE PROTECTOR DIFFERENT COMPARED TO CONVENTIONAL SAFETY BINDINGS?

Conventional bindings from all major suppliers are designed to reduce the risk of injury to bones in the lower leg. However, they are not suitable for preventing knee injuries. Since the 1980s, little has changed in technology and functionality in this regard, but injury patterns have. With the carving ski boom, the number of serious injuries to the knee - especially to the ligaments - has increased dramatically. This is mainly caused by backward twisting falls, which account for 70% of all falls. These injuries are what we focused on reducing.

WHAT NEW TECHNOLOGY IS FEATURED IN THE PROTECTOR?

HOW DOES THE FULL HEEL RELEASE (FHR) WORK?

Low, short-term forces are absorbed by the 7mm of horizontal, bilateral movement of the heel. When the load exceeds the FHR settings, the heel slides horizontally the full 7mm and rotates open by 30 degrees to release the ski boot. This feature establishes a new benchmark in ski binding safety and functionality. Thanks to the more constant release values, the forces acting on the knee and its ligaments are reduced by more than 50%. With the PROTECTOR binding, TYROLIA thus achieves a significant reduction in the risk of knee injury in the event of a fall.

DOES THE NEW HEEL DESIGN AND THE RESULTING LOWER RELEASE VALUES FOR BACKWARD TWISTING FALLS AFFECT THE SKIER'S PERFORMANCE OR FEEL?

In a word: no. Five-time Kitzbuehel downhill winner Didier Cuche confirmed this during his on-snow tests. Despite the new movement found in FHR, there is no increase in the risk of pre-releases. The new features, including the 7 mm bilateral movement of the heel, are simply not noticeable while skiing. In addition to FHR, the new PROTECTOR binding offers all of TYROLIA’s industry-leading safety features along with on-snow performance that matches any other conventional TYROLIA binding.

HOW COMPLICATED IS IT TO SWITCH TO THE NEW FHR TECHNOLOGY?

The transition is very simple because the PROTECTOR binding can be quickly and easily utilized on any ski model with a pre-mounted Power Rail base. For all flat skis, TYROLIA offers the PROTECTOR Set versions as well as the PROTECTOR Attack model. This also benefits rental businesses that can easily offer the FHR technology for maximum safety.